Over a Table of Coffee

Conversations happen over cups of coffee. We all know that. How about over a table of coffee? Imagine having a conversation not only over a table of coffee, but about the table itself. Sounds uncanny? Imagine a table top that’s not just an ordinary slab of utility but a piece of art - a piece of art which is a result of unconventional thinking and rigorous efforts. Imagine it to be an outcome of intelligence combined with art, of a vision that’s contemporary yet timeless. Now, imagine having a conversation about a table; such a table. 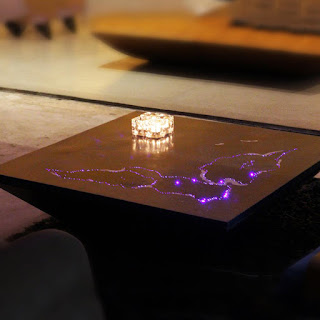 Yes, that’s what happened when we unveiled our first table top at the ID Satellite, Mumbai in the November of 2016. Bharat Floorings has been known to create artistic cement products, but this was special. In collaboration with Red Blue and Yellow, we designed the Space and Time themed table tops which were inspired by the magnificent and mysterious nature of space and unchallenged authority of time over the universe. Built in two sizes, the table tops were not only built in concrete using colours resembling space and time but also comprised of optic fibres that would emit lights to lend an astonishing effect to any interior space. These elegant table tops were displayed at Red Blue and Yellow itself for the public eye during the ID Satellite Design Trail. The table tops garnered appreciation and applaud from art enthusiasts, interior designers, décor consultants and lifestyle bloggers at the event and even after that. 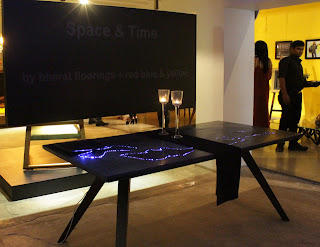 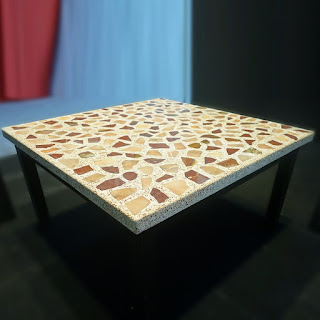 Following the popularity and much cherished enthusiasm associated with the first limited edition table tops, we decided to design a newer one. This time it had to be completely different that the previous theme, since the previous one was strictly not to be replicated. Without much hesitation, our team narrowed down upon the idea of having the classic terrazzo look for the table top. Why just the look, why not a table top made of actual terrazzo? Bharat Floorings and Tiles answered this question with the latest version of table tops – The Terrazzo Table! As one would guess, a white cement terrazzo table top was conceived with Red Aventurine & Red Jasper stone chips and our signature Pink, Red & Verona Red chips, anchored upon powder coated MS (Mild Steel) table stand with a Matte Black finish. What more if you may ask, the Terrazzo Table was unveiled at the India Design ID 2017, thus, making the idea develop an unsaid tradition.


Well, when the next time you pick up a coffee table book alongside a warm, fresh brew, and think of what is missing, look down to your table.
Posted by Bharat Floorings and Tiles at 19:30