There are some immensely beautiful restoration projects that BFT has done in the past couple of years. It has indeed been an honour to be a part of such significant contributions to the preservation of India’s rich heritage and incredible architectural marvels. Bharat’s Heritage™ Tiles are a part of the Heritage Gallery & Interpretation Centre at Chhatrapati Shivaji Maharaj Terminus Mumbai and have found their place in the grandest of royal palaces and plush Raj Bhavans. BFT has been a part of several landmark restorations including the Cathedral & John Connon School, the Salar Jung Museum and Mumbai’s oldest museum, the Bhau Daji Lad Museum. Iconic buildings everywhere are being restored by India’s leading architects relying on Bharat’s Heritage™ tiles and flooring experience. The icing on the cake, for BFT, is being chosen for awards from UNESCO for Cultural Heritage Conservation.

Royal Bombay Yacht Club is an iconic structure at Apollo Bunder that has, over the years seen many prominent visitors. The Bombay Yacht Club was founded in 1846 with Henry Morland as club commodore and 30 years later - on the recommendation of Sir Philip Edmond Wodehouse and the patronage of Queen Victoria became known as Royal Bombay Yacht Club. After its sympathetic restoration, the Royal Bombay Yacht Club Residential Chambers received an award of merit in the 2013 UNESCO Asia-Pacific Heritage Awards and was chosen out of 47 entries from 16 countries!
The Yacht club was restored by prominent architect and the brains behind the restoration of several gems in the city of Mumbai, Mr. Vikas Dilawari. The restoration of this striking structure involved recreating the old Minton floor, and hence Bharat Floorings & Tiles was called upon to create the desired result. Several prototypes were created over a period of many months until the floor was a close replica of the original floor. The depth and complexity of the flooring is evident since, while a normal Heritage™ floor would be composed of at most 2 or 3 elements, the Yacht Club floor has 6 elements! These tiles are so beautiful and look even better on display in the lobby area of the grand Royal Bombay Yacht Club. It is a matter of great pride for BFT to be associated with the restoration of this prominent structure located on the city’s breath-taking coastline. 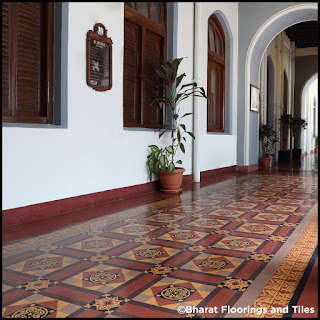 The Dr. Bhau Daji Lad Mumbai City Museum is an institution of the Municipal Corporation of Greater Mumbai. The Museum was established in 1872 as the erstwhile Victoria and Albert Museum, Bombay. As Mumbai’s first Museum, it showcases the city’s cultural heritage and history through a rare collection of Fine and Decorative Arts that highlight Early Modern Art practices as well as the craftsmanship of various communities of the Bombay Presidency. The museum won the 2005 UNESCO Asia Pacific Heritage Award of Excellence for Conservation.

The tile used in this museum is the Star and Diamond pattern from the Heritage collection. This space, too has been designed by Mr. Dilawari. The Heritage tile imparts a rich and historical vibe and, makes a lasting impression on every visitor who walks through the doors of one of the city’s oldest treasures! 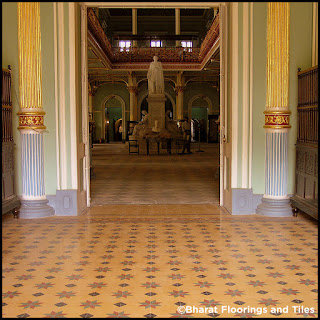 Located exactly opposite another UNESCO Heritage Site, the CST station building, and yet standing tall is the BMC Headquarters. The restoration project started in 2006 and every attempt was made to save the old tiles and antique furniture which added to the historic charm and period appeal of this architectural marvel. The original Minton tiles were re-used with replica Bharat tiles replacing missing patches, thereby maintaining the original look of the floors and further preserving the old world charm of this grand Victorian Gothic structure around which the city of Mumbai has grown and prospered. 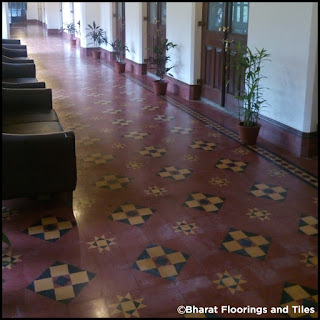 With an ancient heritage that dates back to 1860, this private school located in Fort is one of the most prestigious educational institutes in the city. Completed in 2001, the restoration project of this school building was headed by architect Brinda Somayya and included restoring several elements of the building including the flooring. The Inverlochy pattern tiles from BFT’s Heritage range were used during the restoration process in shades of Jaisalmer Yellow, Terracotta Red and Dark Green, and it graces the passages of the school giving them a royal look and maintaining the overall grandeur of the space. This vibrant design is based on the one used in Inverlochy Castle in the 18th century and fits in perfectly with the Victorian Gothic style of architecture that is the foundation of the school. 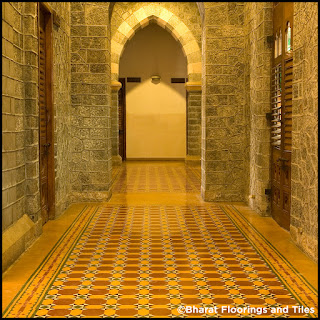 With almost a century of experience, BFT’s floor art ranges from the classical to the modern, making each floor a unique work of art specially designed to fulfil the dreams of each client. Bharat Flooring’s Heritage™ tiles and floors are custom designed to create stunning floors to suit eclectic tastes. The timeless elegance and durability of these tiles makes them an invaluable part of the country’s architectural heritage. As a brand that has a deep-rooted connection with the identity of India, nothing gives us more pride than the fact that our floors have found a home in these splendid architectural gems with significant historical relevance when it comes to our country’s rich and vibrant past.

Posted by Bharat Floorings and Tiles at 00:40