Becoming a part of history!

It was a moment of great pride for every Indian when Ahmedabad bagged the World Heritage City status from UNESCO. The 606-year-old walled city founded by emperor Ahmed Shah was declared India’s first World Heritage City on July 8, 2017. And, rightly so we say! The Indian independence movement developed its roots in this city, led by the
Father of our Nation – Mahatma Gandhi who was at the forefront of India’s non-violent freedom struggle. What additionally contributed to this rightly deserved title the city proudly holds today is the exemplary architecture of the intricately carved wooden Havelis dating back hundreds of years!!! Ahmedabad stands unique as a culmination of various architectural styles and a historical relevance that defines its outstanding universal value. 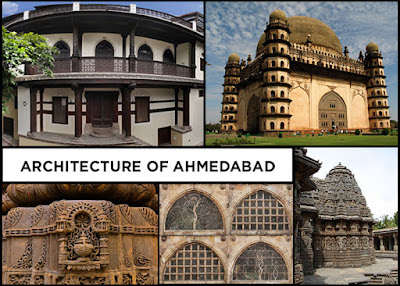 The city of Ahmedabad is endowed with a rich architectural heritage that is vital to the local identity and continuity of the place.  BFT is proud to be associated with the city having helped in the restoration of one of Ahmedabad’s prized possessions - the “Deewanji Ni Haveli”. The 250-year old Deewanji Ni Haveli is a wooden icon intrinsic to the 606 -year-old of Ahmedabad. “Deewanji Ni Haveli” literally means house of the Deewan, a minister in the court of the King, where the Deewan and his family resided during the years of the Mughal Empire.  Revitalized and embellished by the City Heritage Center, an NGO promoted by a group of entrepreneurs, the Haveli is an image of a vision shared by hundreds who wish to see the old city restored to its former glory.
The origin of this magnificent Heritage building traces back to Ahmedabad's Mughal Era. The architecture, intricate wooden carving, lime stucco and stonework epitomize the splendour of our culture and traditions. The Haveli is a resplendent- three-storey building, with a north and east entry (which is built on a height of 6 feet), crafted to elevate your stay in the heart of Ahmedabad. Its chowk,*jhula*, bedrooms, ballrooms, library, art gallery, *tanka*-all have fables to tell. With so much under one roof, and every shelf and corner having its own rustic charm, you cannot help but notice the glory right under your feet.  This restoration project features some of the most popular tiles from Bharat Floorings Heritage™ range.  Various patterns from the Heritage™ collection have been utilized to add to the splendour and grandeur of this beautiful haveli.

The Tulip design, Inverlochy pattern, French Beauty, Egyptian pattern from the Heritage™ collection all go wonderfully well with the overall look & feel of the restored Haveli. 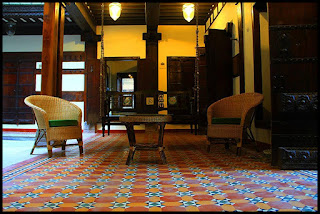 The entrance of the Haveli is designed using the Inverlochy pattern from the Heritage™ Geometrique collection. The seamless pattern with bold colours creates a look and brings out the desired look; a look that later became an integral part of the Haveli. 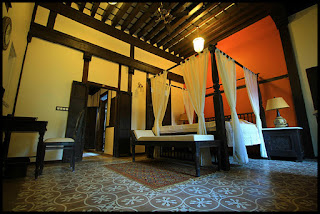 The flooring used in the bedroom of this Heritage Haveli is the Tulip pattern adds to the vintage look while transporting you back to a world that once existed and thrived in this very haven that today serves as a resting spot for travellers seeking a peaceful getaway! 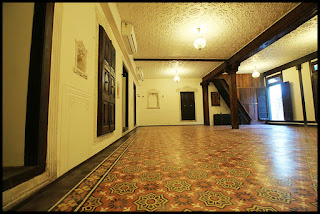 The Egyptian pattern from the Heirloom collection has been used to give a traditional and dated look to the space. 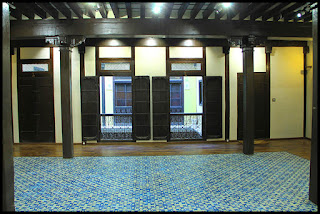 The French Beauty pattern from the Bloom collection laid in the adds vibrancy to a space that is otherwise dominated by a neutral palette. This carpet look adds a touch of warmth and softness to the interiors. 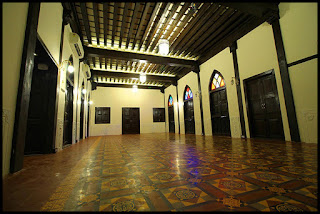 The classic customized pattern in geometrical shapes and floral designs from the Heritage™ collection has also been utilized in this common area. These are some of our oldest designs, and the fact that they are still used widely shows how timeless they are. How perfectly does it blend in with the rich and opulent interiors of this grand Haveli!!

It is such a privilege to be a part of a project with so much historical relevance and significance.Being involved in this restoration and upliftment project in a city that is beyond reflective of our country's rich and glorious past reminds us that we are still, as a brand staying true to the original values we set in place 90 years ago i.e. to become a part of India's history!

Posted by Bharat Floorings and Tiles at 03:32