And it continues...The Made in India II series

India! The land of diverse cultures and beautiful natural landscapes! Our country has a rich heritage and, a vast and varied culture that makes every Indian proud to belong to this glorious nation. Each state in India is a unique repository of its own arts & crafts, food, architecture and history. The heritage and culture of each individual state when fused together form an iridescent amalgamation that is beautiful in the truest sense of the word. As a brand that’s inherently Indian, we are proud to have contributed towards the revival of our country’s rich culture through the introduction of the magnificent Made in India range.

Once again, we travel back to our roots with a collection that celebrates our country’s rich diversity, cultures, heritage and art - creating the Made in India II series in association with design studio - Idea Spice. The following are the states that we explore in this extended series - Goa, Punjab, West Bengal, Himachal Pradesh, Assam, and Arunachal Pradesh. After a lot of research that went into identifying the forte and the unique social and cultural characteristics of each state, the same was entwined into tile designs to stand for what India truly represents – UNITY IN DIVERSITY. 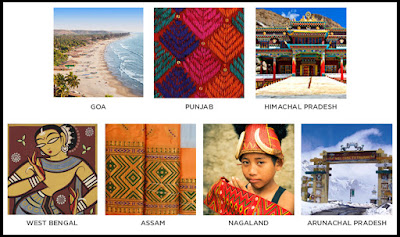 The first state, Goa is in western India with coastlines stretching along the Arabian Sea. Goa is also known for its iconic beaches, ranging from the most popular stretches at Baga and Palolem to those of laid-back fishing villages such as Agonda. The Wave pattern from the Made in India II collection is inspired by the waves, sand and relaxation offered by the country’s ultimate holiday destination!

The second state that we pay tribute to is Punjab - the vibrant state is filled with bountiful culture, heritage, festivals and vibrant landscapes. The Phulkari pattern from the Made in India II collection was inspired by the colourful phulkari dupatta, the most well-known embroidery work that is symbolic of the state of Punjab. This wonderful piece of clothing is created with splendid colours and complex embroidery. The word phulkari usually indicates a lightly embroidered headscarf, dupatta or shawl that is lovingly crafted by the women of Punjab. The colourful Phulkari dupatta of Punjab is famous in India and abroad. Inspired by its geometric floral designs we created our own PHULKARI TILE.

The third state, West Bengal has always been prominent in the field of art and culture, giving birth to a large number of modern movements in literature, painting, and theatre. The unique rustic and mystic charm of Bengal crafts are admired by art lovers all around the world. The Bindi pattern from the Made in India II range was inspired by the unique art style of the famous Bengali painter, Jamini Roy!

The fourth design is from Himachal Pradesh that is reminiscent of its spectacular mountains, snowy peaks, plugging river valleys and the century-old Buddhist monasteries. Monasteries in the state are a famous part of the history and culture of this region. The Made in India II range inspired by the Endless Knot represents the infinite wisdom, knowledge and compassion of the Buddha.

The fifth state that inspired our collection is Assam, which is a state in North Eastern India. In the west, Guwahati, Assam’s largest city, features silk bazaars. This silk is used in their traditional sarees known as Mekhela Chador. Mekhela chador is a traditional Assamese dress worn by women. These sarees have ornamental designs on them that are traditionally woven, never printed. Muga, Pat or Eri silks are used for making their traditional two pieces Assamese sarees known as Mekhela Chador. Inspired by these patterns, we created the “Mekhela” tile.

The sixth state that inspired our collection for the Made In India II collection is Nagaland. Through their crafts, women play an essential role in maintaining the heritage of the tribal society. Inspired by the Naga tribe’s Chang cloth used for their patterned shawls, and the harmony symbol used on the monasteries in this region we created the CHANG WEAVE. 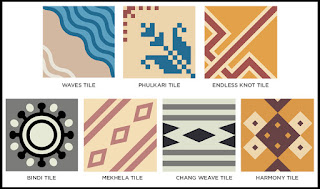 Combining the forte of each characteristic of the states into designs that truly represents the culture of India, we created the Made In India II collection. Hope you all love it!

Posted by Bharat Floorings and Tiles at 07:15