Paradise in the Hills

What follows after a long and tiring week is the desire to escape the routine. Some people find rejuvenation at one of the fancy places in the city crowded with people who come together with a similar motive to celebrate the weekend, while others believe in catharsis in the midst of natural serenity. For the latter kind, many scenic hill stations not too far from the city have loyally served the purpose. A popular getaway for city folks is Lonavala, in the Pune district of Maharashtra. This tiny hill station is located at a distance of 96 kilometres from Mumbai and comfortably connected by the Mumbai-Pune Expressway. What’s more exciting than a hill station being easily accessible is to own a palatial farmhouse at such a lovely location. Nidhi Kanoi is one of those lucky few. Working as one of the directors at the Mumbai based TechFab India, Nidhi more than deserves and takes pride in her getaway home. Rishita Das and Rushda Hakim, partners at Design Office, and two of youngest, brightest minds in the interior designing circle started designing the house, and eventually created magic. 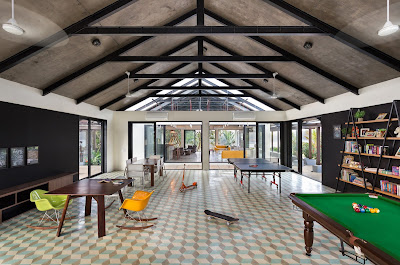 Bharat Floorings and Tiles has long been the preferred choice for architects and interior designers when it comes to decorating large spaces, both commercial and residential. The availability of large rooms served as nothing less than a canvas for art. The duo gave every room a unique identity and yet provided a sense of continuity with the elements they used. Given the knack for artistic perfection, Rishita and Rushda wanted everything including the flooring to highly complement their work. Various patterns were extensively researched before finalizing the tiles. There was enough room to allow every pattern to stand out as an independent design and also easily blend in with the rest. Heritage™ tiles from the Bloom Collection and the Cubist Collection were prominently used considering their timeless elegance and durability. Decorative concrete like Acid Stain and IPS were used as cosmetic and aesthetic enhancements to structures while still retaining their function.

This beautiful farmhouse at Lonavala is one of the many milestones achieved by those involved in the creation of such an amazing luxury home. Design Office’s talent and dedication combined with the designs and efficiency of Bharat Floorings ultimately shaped Nidhi Kanoi’s dream house. A job well done at that!

Posted by Bharat Floorings and Tiles at 03:14