Paving the Way for the future!

Completing nearly a century since the beginning of our journey in 1922, there couldn’t have been a better time for us to dive deep into our vibrant past and chart out the various stages in our company’s growth journey. Thanks to our friends who are history lovers and archivists at Past Perfect who helped us in discovering rare archival materials with the guidance of our Chairperson Mrs. Dilnavaz Variava, that brought back a sense of nostalgia and pride in our achievements over the last 97 years. These were displayed at a thematic exhibition called Paving The Way that celebrated the Indian Tiling Industry.

This exhibition threw attention to the untold story of Indian design, enterprise and the growth of the design world. The exhibition shed light on the city's architectural history, to showcase a story that was left untold, put together through original exhibits, images of the old flooring from the 30s, 3-D printed models, newspaper articles and advertisements related to the construction industry! The exhibition covers the history of a few iconic landmarks that are a testimony to BFT's iconic work and how each design has adapted to changing times. The aim was to make people ‘look down at the beautiful floors while walking all the time’. 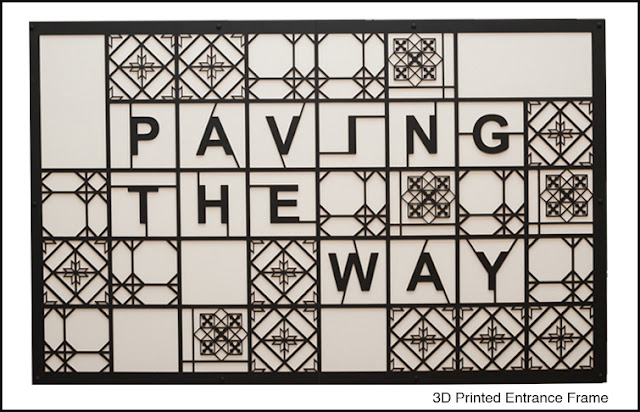 In the past few years, we have been witnessing an excess of conversations and exhibitions around the architectural diversity of Mumbai. Those stories were unfortunately incomplete and excluded another, less-documented area, which is the interiors of the city’s iconic buildings which were as stylized as the exterior. Floorings and tiles, whether industrial or hand-crafted, have always added to the character, heritage, and utility of the structures they were laid down for. Patterned tiles look attractive and can upgrade the interiors of the space instantly!
What role did tiles play while designing a space? How did different patterns align to the wide variety in architectural styles? How were they made and what ensured their durability? What were the popular colours and patterns? Curated from archival materials from the 20s to 70s sourced from the archive of the Bharat Flooring Tiles, this the exhibition attempted to answer these questions, spark a discussion around the floors we walk on every single day and expose audiences to the nuances of the tiling industry. 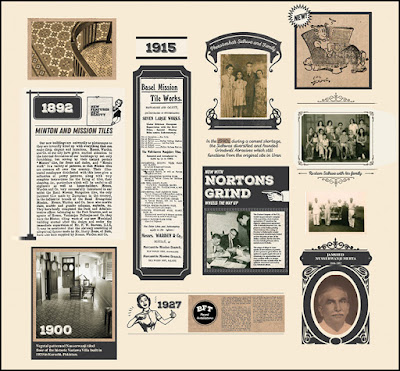 The exhibition archives this story of a home-grown enterprise, and how it moulded itself to reflect the changing tastes and trends of the times. BFT’s milestones form the five major modules of this exhibition: Tapestry in Cement; The ‘Moderne’ Home; Commercial Elegance; Floors To Your Taste; and Heritage Renaissance.

We had some beautiful anecdotes on display at the exhibition including the original tile from Nusserwanji & Co. Karachi, Undated. Nusserwanji Mehta, a businessman from Karachi and a close friend of Mahatma Gandhi, inspired Pheroze Shah Sidhwa & Rustom Sidhwa to start Bharat Floorings & Tiles by saying "India needs both economic and political independence" in 1922. 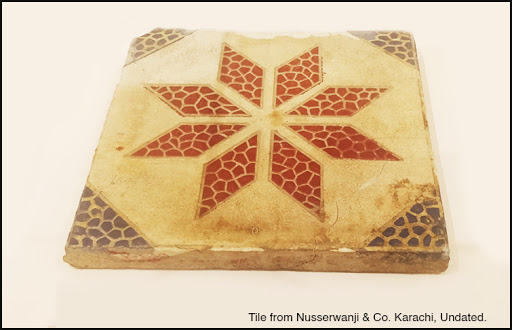 Along with Ms Almitra Patel's poem recitation inspired by the floor in her childhood bedroom which had the Inverlochy pattern. The vibrant colours and the Heritage pattern has always remained in her mind. You can listen to the entire poem as recited by Ms Almitra herself here – https://www.youtube.com/watch?v=e3CKkd3UrEE 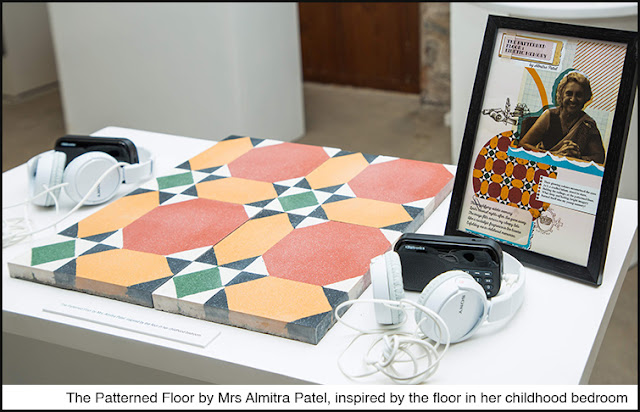 The Ideal Home Exhibition in 1937 was the first attempt of any such type in India and was conceived, designed and organized by the Indian Institute of Architects. The exhibition concerned the sphere of life which touches every one of us virtually, the sphere in which we spend more than half our lives. The exhibition, therefore, seeks to bring within the ken of each one of us in a pleasant and easily accessible form. They used the latest devices to make this vital environment of our lives more comfortable, more modern, more congenial and perhaps more artistic. The Ultra-Modern Bar was displayed by Bharat Tiles and Marble Co. in this exhibition. It pays a glorious tribute to Bharat’s skilled decorator-artist, Herr Albert Millet of Berlin – and to their beautiful marble and ‘Colourex’ cement without the designer’s dream this could not have been materialized. 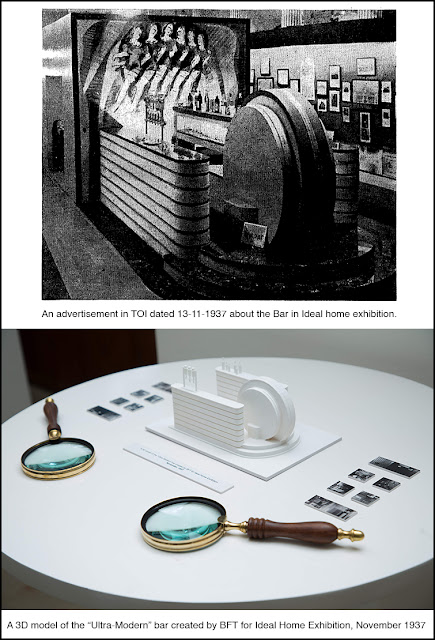 Visiting our first module at the Paving the Way exhibition – Tapestry in cement!
BFT produced patterned tiles to stop Minton tile imports for economic freedom and growth. Patterned floors, is an architectural movement heavily influenced by gothic buildings since the middle ages, were once again made popular in the 19th century by Herbert Minton. Known as encaustic tiles, they were made by layering different colours of clay allowing for profusely decorative patterns. Gothic Revival was one of the most influential design styles of the 19th century. Designs were based on forms and patterns used in the Middle Ages.


And then in 1922, fired by ‘Swadeshi’ spirit and inspired by Jamshed Nusserwanji Mehta of Karachi, Pheroze Sidhwa and his nephew Rustom Sidhwa started Bharat Floorings Tiles Co. and thus eventually eliminating the public's reliance on imports. The tiles manufactured were laid in iconic buildings in Mumbai, the Readymoney mansion, Brady flats in Colaba, Darbhanga mansion in Carmichael road and many more! 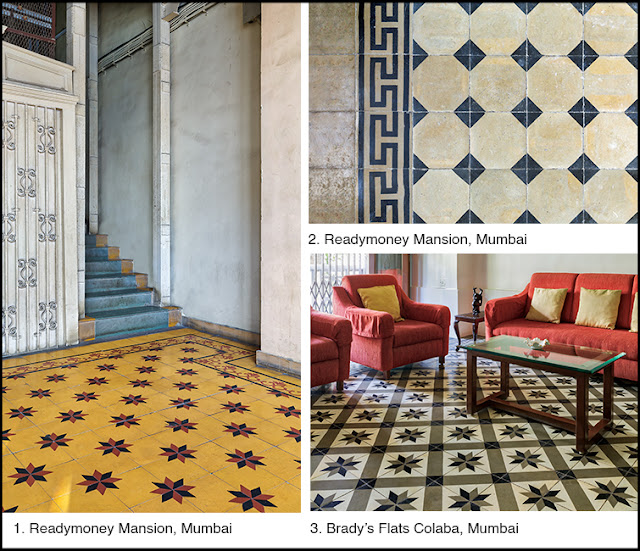 Moving on to our second module at the Paving the Way exhibition – The ‘Moderne’ Home. Post the Gothic period, the Art deco period ushered in, in the 1930s which is also known as the ‘Style Moderne’ period, marking a shift from carpet pattern tiles to terrazzo tiles or plain cement tiles laid in geometric Art Deco style. The vision of the company remained unchanged, and the aim of laying a unique, custom designed floors that would combine beauty with strength and durability was met with each completed project. Right from laying the floors of residences of Mumbai's elite to iconic public buildings such as hotels, cinemas, schools, clubs and hospitals, Bharat Floorings and Tiles was undoubtedly deemed the leading tile manufacturing company back then and even today. Few places where Bharat Tiles are spotted are – the art deco buildings at Oval Maidan, Kamal Mahal at Napeansea Road, Dhanraj Mahal at Apollo Bunder, The Bombay Royal Yacht Club and many more! 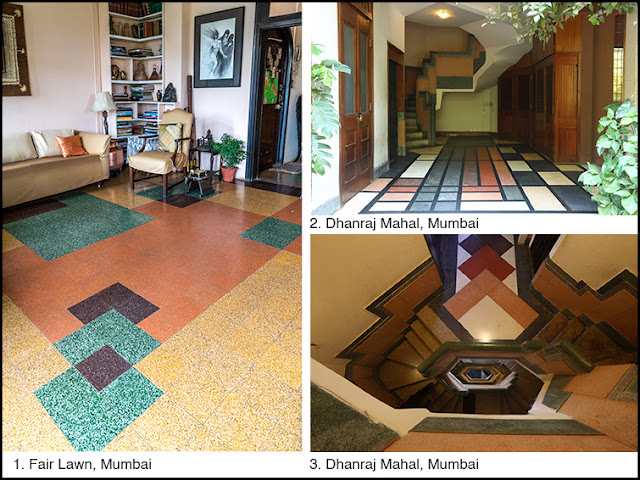 As Bombay (now Mumbai) grew in commercial stature during the interwar period, new urban schemes were laid out and construction work bustled. Our 3rd Module is – Commercial Elegance. A range of Indian and Italian marble, in conjunction with plain cement Companies from banking, insurance and finance sectors acquired massive plots of land and built imposing headquarters in Bombay’s business district. Their façade, heavy with ornamentation, bas relief and detailing were complimented by a graceful but minimal interior. The tiles lent a quiet elegance to these stately structures. 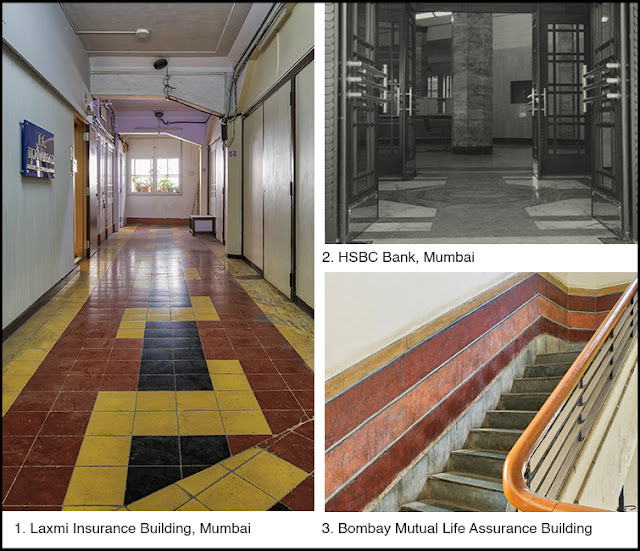 1. A zig-zag pattern, to indicate a direction, in a lobby of the Laxmi Insurance Building, 1938.
2. The walls, floors and top and front faces of counters of the Bombay Mercantile Bank were graced with Italian marble supplied by Bharat Tiles & Marble Co. Today the building is the headquarters of the HSBC Bank which acquired it in 1959.

3. Bharat’s marbles in rich terracotta colour, in conjunction with aluminium strips and coloured cement, branded as Colourex, enhanced the dado work in the lobbies and staircase of the Bombay Mutual Life Assurance building (Citibank branch, D N Rd.) built in 1936.


Floors to your taste our 4th module which talks about the changing taste and preferences in the design world and how BFT has adapted to it. The advent of the British impacted the way Indians looked at housing. Indians saw the British bungalow living as aspirational and by the 1930s, the bungalow lifestyle was widely adopted. The Bombay Bungalow, now almost exotic to our cityscape was once the choice of the elite. Every element of the home could be handpicked and created to fit the design concept of one’s home. At this time, BFT’s more discerning clients commissioned, and the company crafted. As the city grew vertically and apartment complexes became the vogue, individualism became rare and quality was compromised and replaced by cheaper material.

Our fifth and final module at the Paving the Way exhibition – Heritage Renaissance.

BFT has collaborated with conservation architects who have played an integral role in restoring the floors of some iconic heritage sites in Mumbai – amongst them Dr. Bhau Daji Lad Museum, The Royal Bombay Yacht Club, and Esplanade House (Vikas Dilawari), Mani Bhavan, Bombay High Court, Royal Opera House, the Keneseth Eliyahoo Synagogue (Abha Narain Lambah) and The Cathedral and John Connon School (Brinda Somaiya), to name just a few.
The Paving the Way exhibition however in this module showcase BFT’s most recent flooring restoration project – the Keneseth Eliyahoo Synagogue under the supervision of Conservation Architect Abha Narain Lambah which left the city bedazzled. Keeping in line with the Neo-Classical and Gothic-Victorian architectural elements of the synagogue, the company developed and laid tiles like the original Minton tiles in its prayer hall. BFT spent many laborious months replicating the exact pattern and colours of this complex design to make its Minton tiles merge seamlessly with the original floors. 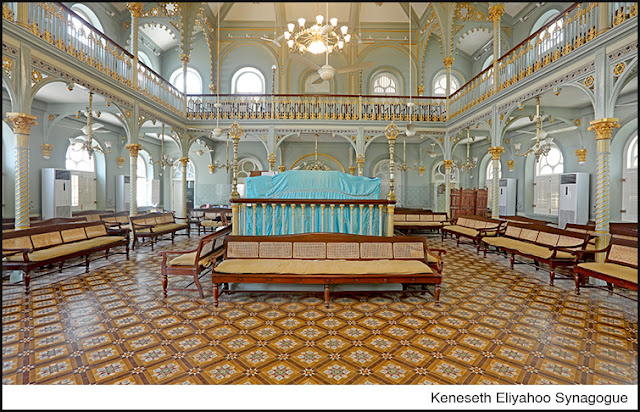 We take this opportunity to thank -
- Research and curation: Past Perfect Heritage Management
- Design Partner: Ideas spice
- 3D Partner: Sahas Softech LLP
- The Story of Bharat: A film by Switch Studio
Photo Credits:
- Dr. Abigail McGowan for Mafatlal Bungalow.
- HSBC Archives, London for Interior photographs of Mercantile Bank of India, London and China.
Marvi Mazhar & Associates, Karachi as Creative Research Collaborator for Karachi material.
- Allen Fernandes, Photographer for J N Petit Library
- Institute of Indian Architects.
- Special thanks to all residents and landlords of homes and offices showcased in the exhibition.
Follow us on our Instagram account for updates on upcoming events that you could be a part of - @bharatfloorings and Facebook page - @Bharatflooringsandtiles!
To know more check out our website - https://www.bharatfloorings.com/
Posted by Bharat Floorings and Tiles at 00:45