The Make in India wave has been taking the country by storm. Patriotism has been at its peak after a very long time with everyone displaying how loyal and inclined they are towards the development and glorification of our motherland. While some are trying to successfully fit in, others are using it as a turf to grow. When Bharat Floorings decided to introduce a collection of tiles inspired by the various regions from India, the sole purpose was to appreciate the rich cultural heritage of our country; because Make in India is a principle we’ve already been following since the pre-independence era. 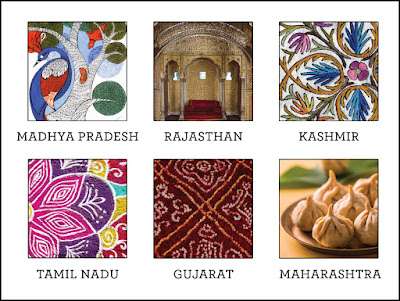 The first state, Madhya Pradesh, is a large state in central India with landmarks from eras throughout Indian history. The Gond pattern from the Made in India collection is inspired from the art forms of the four Gond tribal communities that inhabited a large part of this region. The Gond art is based upon their belief of "viewing a good image brings good luck".
The second state picked was Rajasthan which is a northern Indian state famous for its historic, Mughal and Rajput palaces and forts. The Jharokha pattern from the Made in India collection is inspired by an additional architectural structure over-hanging an enclosed balcony or stone window, mostly canopied, of these palaces and mansions.
Jammu and Kashmir is a state in northern India located mostly in the Himalayan mountains, bordering the states of Himachal Pradesh and Punjab. The Pashmina range is inspired by patterns of Pashmina, a ﬁne type of cashmere wool, which is largely used in the production of shawls, popularly found in Kashmir, and the landscapes of this region.
Tamil Nadu is a South Indian state famous for its Dravidian style Hindu temples and various art forms. Kolam, a form of drawing made using rice ﬂour or chalk powder, is a representation of celebration and thought to bring prosperity to homes in Tamil Nadu. The Kolam pattern from the Made in India collection is inspired from the symmetry and precision of these drawings.
Gujarat is an Indian state with varied terrain and numerous sacred sites, with also a museum of textiles displaying antique and modern Indian fabrics. Bandhani is a type of tie-dye textile that involves dyeing a fabric, which is tied tightly with a thread at several points to form a ﬁgurative design. Largely found and associated with Gujarat, the diamond shape that is formed while dyeing the fabric is the inspiration for the Bandhani range.
Maharashtra is a state in west-central India known for its fast-paced capital - Mumbai, Bollywood, temples, caves, British era monuments, the rustic Konkan coast, and more. Modak is a popular dessert in Maharashtra traditionally dished out during the festival of Ganesh Chaturthi. They represent the zeal and enthusiasm most evident during any celebration of life. The Modak range has been inspired from the drop-like shape of these sweets. The illustrations used are curvy at the bottom and pointed at the edge, similar to the traditional form of the sweet. 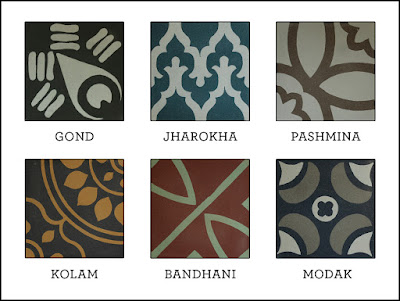 Embodying these characteristics, each forte has been entwined into the designs to stand for what truly represents India and its cultural heritage.

Posted by Bharat Floorings and Tiles at 00:02